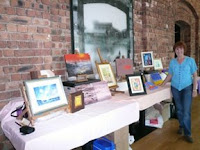 The day began at 5am - it seemed like the middle of the night - it's a long time since I've seen 5am I can tell you!

The weather was dreadful. We were not flooded, were conscious that most of the country was and we didn't have a clue if we needed a car or a boat to get to Lincoln. But we always look on the bright side and although there was lots of rain and standing water we arrived without incident. Sat nav was on top form, bless her. The going South syndrome didn't strike. Maybe that was because we were going South then turning East lol!

We arrived at 9.30am. Of course it was still raining and it continued to rain all day which was sad as it affected the attendance. After unloading the car, ably assisted by four angels (don't know your names but thanks girls), I took the car to park and what happened next was a near disaster . . . my hair got wet!!! I had left the brolly in the car as the rain had stopped briefly only to come down again big time as I headed back to the building.

I have to say the organization could have been better. There was nothing directing people to the venue for the authors readings, nor was a time given for this. In fact helpers seemed to know little about it. It was a pleasure to meet Val Lee and Paul Burston and Val's friend Mary, who had traveled from early morning to be there and then had a long train journey home. It was very frustrating for them to find there was nothing set up; no tables, no refreshments not even water and no time/venue announcements.

This was my first Pride event and with hindsight perhaps I should have taken posters for the organizers to display. But to be honest I thought they would have done this automatically. Certainly a learning curve for everyone. As a result it was a small audience for us authors which is sad, everything considered. It meant a lot of people lost out on the opportunity of meeting us and buying a signed copy of our books. Although I did manage to sell a few downstairs in the 'market place' while I was drumming up interest, as well as at the reading.

You'll notice that we set off early. Well, this was because Sat Nav (my love) was exhibiting her beautiful paintings. It was very disappointing as she was placed upstairs on the walkway to a bar that was closed and out of the way of everything. I know it was the first time for an artist to attend but it was an insult that she wasn't listed on the brochure/flyers. So nobody knew she was there until we authors did our bit in the bar area. Again there were no signs directing people to her display. She had done work especially for the exhibition. Needless to say all of her beautiful paintings came home, and boy, did you all miss a treat. So go to Gloria's Gallery and take a look in a day or so.

We set off for home at 4.30pm (thanks again angels for helping us out) both thankful that we weren't going back on the Sunday, and that the river beside the University hadn't burst it's banks.

We don't want to put a downer on Lincoln Pride Organization, I know it's only their second year, but when authors/artists are specifically invited and give up their precious time to attend people need to know they are there.