My friend Brian, what can I say!

Brian sent several mysterious texts asking me if I had received a package (he thinks he's James Bond). I replied saying the aliens must have intercepted it, because I hadn't received anything.


Today I receive another text; had the package arrived yet? I replied, no it hadn't. Then when I was putting the milk bottles out I discovered a package beneath my living room window. Thank goodness it was well protected against the torrential rain.

I must say I was a little apprehensive about opening this package! 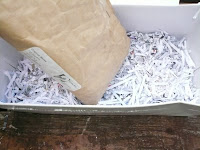 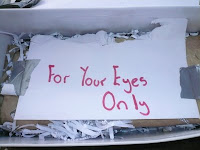 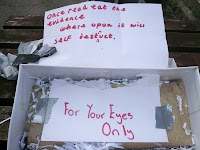 This was what was in my package. Kit Kats - yum yum my favourite biscuit, and a big hint to put the kettle on! Cheers Brian! 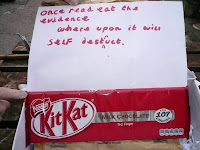 This is a photo of Jimmy Atkinson, my friends son. Today he won the Young Model Farmer Award 2009. Congratulations, and well done Jimmy!
No comments: 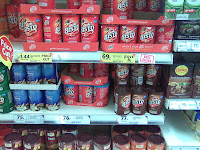 I'm all for reducing my salt intake, and healthy eating. So, when Sat Nav and I went to Tesco today naturally I looked for food with reduced salt.

We wanted some gravy granules so I picked up some Bisto gravy granules proudly showing a blue and white 'Reduced Salt' banner. Great, I thought as I popped them into the trolley.

But hang on a second!

A Best Seller sticker and price reduction for ordinary Bisto (red lid) gravy granules displayed on the shelf above caught me eye. I was surprised, and somewhat annoyed, to discover that the 'Reduced Salt Bisto' was actually 7 pence more expensive than the ordinary.

So, I have a question for Tesco. Why should customers have to pay extra for gravy granules with reduced salt?
No comments:

Look what happened when I waved my magic wand! Yes, Abba 2 Bjorn Belief appeared on stage. They flew into Masham by helicopter from a little place just outside Sweden, called Swansea.

And, even though it was a very hot night, everybody was up on their feet dancing. You performed a brilliant show guys, can't wait for next time. Thank you for my tiara Lorraine, it fits perfectly!

Andy, what can I say, the cakes were absolutely delicious, thank you. Our turn next time ;-)
2 comments:

I had an unusual experience on Thursday 2nd July 2009. Yes, another one.

I looked out of the window and saw orange lights in the night sky. It was about 11pm.

I thought the lights were helicopters, so went outside for a better look. There was no noise from them at all. It was a quiet still night. I shouted to Sat Nav to come outside and have a look.

We saw seven lights that seemed to be flying in formation, and then after a while another light appeared from nowhere way behind them. We watched them for about ten minutes.

Sat Nav grabbed a camera, but had trouble holding it steady (must have been the excitement) so the pics are not very good. And then the lights disappeared.

I rang the police and the person I spoke to said they had had another report of the same sighting. She informed me it was the RAF at Leeming Bar carrying out an exercise. I believed it at first, now I'm not so sure. I have a friend in LA who said her father used to fly F1-11s at Lakenheath, and I was right to think it was a UFO.

Because our pics aren't so good I googled to see if I could find any that resembled what we saw, and found quite a few that were taken in the UK last month. I have added one of those pics for you to see.

The lights we saw were in a straight line at first, and then seemed to be stacked like traffic lights with gaps between them giving two sets of three lights and one light out on its own. The eighth light that appeared was totally alone.
4 comments: 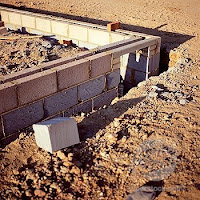 When you start to build a business - make sure you start with good solid foundations. 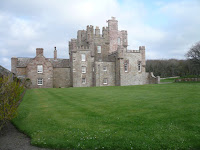 Visualize the end result as a castle, grand and solid.
1 comment: