United Kingdom – While everyone secretly dreams of inheriting a vast fortune, one of the protagonists in Richard Storry’s new novel is living that reality. There’s just one problem, his father is going to make him work harder for it than anything else in his life.
‘The Cryptic Lines’ straddles numerous genres as it takes readers young and old into a world where nothing is granted, yet everything is to play for.

Synopsis:
Set in a sprawling gothic mansion in a remote coastal location, somewhere in the British Isles, the elderly recluse Lord Alfred Willoughby is deciding what is to become of his vast fortune after his death. Whilst his head is telling him to leave nothing at all to his wastrel son, Matthew, his heart is speaking differently.
After much deliberation, in a last-ditch attempt to try and show to his son the importance of applying himself to a task and staying with it to the end, he devises a series of enigmatic puzzles cunningly concealed within the lines of a poem - the cryptic lines. If he completes the task successfully and solves the puzzles he will inherit the entire estate; but if he fails he will receive nothing. However, from Lord Alfred's Will it emerges that Matthew is not the only interested party. The mysterious old house holds many secrets, and nothing is as it first appears...
“Matthew could be about to inherit a sprawling gothic mansion, its contents, the surrounding land and his father’s rather substantial monetary fortune – but it’s going to be far from easy,” explains the author, a graduate of the Royal Academy of Music. “Matthew doesn’t take the news well, igniting something of a bold feud, all while forgetting that simply solving the puzzles would put an end to all of his problems.”
Continuing, “Readers will explore hidden rooms in the house, underground caverns and discover maps leading them to the most unbelievable of places. The final denouement is both a complete surprise and a nerve-shredding climax. What will happen? You’ll need to buy the book to find out!”
With the novel appealing to a wide range of ages and with its popularity rapidly increasing, interested readers are urged to purchase their copies without delay.

About the Author:
Although Richard had long cherished the idea of wanting to write fiction, his training was in a different field: He studied at the Royal Academy of Music for five years, between 1984 - 89, graduating with high honours and a recital diploma - the only guitarist in eight years to be awarded such an honour - and winning the Julian Bream prize. As Richard neared the end of his studies in London, he helped to found the TETRA Guitar Quartet - an ensemble with which he remained for over thirteen years, giving concerts all over the world and releasing four CDs to great critical acclaim.

In his own right, he has appeared on television and radio many times and his many solo performances include playing before Princess Anne at St James' Palace. He has also played for the English National Opera, in addition to acting as coach and musical consultant on a number of plays and musicals in London's West End.

He composed the incidental music to Chekhov's Three Sisters, recently seen in London's West End, starring Kristin Scott Thomas and subsequently broadcast on BBC4 television, and his music for Rumplestiltskin received over 300 performances in its first year alone. Another of his musical productions, Kennedy, was three times nominated for the RUTAC Drama Awards. He has also recently completed a five-volume set of pieces for solo classical guitar.

In addition, to being in constant demand as a teacher and adjudicator of musical festivals, Richard has also branched out internationally, writing for the Chinese Orchestra of Hong Kong. To date, two commissions have been premiered there: "The Fiery Phoenix" and a concerto for xylophone entitled "The Rise of the Dragon Prince". In 2008, Richard was elected Associate of the Royal Academy of Music (ARAM) and he travels globally as an examiner for the Associated Board of the Royal Schools of Music.

His musical adaptation of "The Brothers Lionheart" premiered at London's Pleasance Theatre, followed by a successful run at the Edinburgh Festival. Future projects include an adaptation of "The Selfish Giant", by Oscar Wilde, besides a number of other chamber compositions. Richard's first novel, "The Cryptic Lines" has now been adapted for the stage; and his song "Until You're Safely Home" was recently premiered by the Military Wives Choir.

A native of the Lake District, Richard now lives in a leafy suburb of South London, where he is working on his next novel, “Order of Merit”, but he still relishes the occasional opportunity to ascend some of the more remote Cumbrian Mountains!

Excellent! One of the best books I've ever read.

This book will keep you guessing all the way through with mind boggling twists, and a brilliant ending. I can't wait to read Richard's next novel Order of Merit. 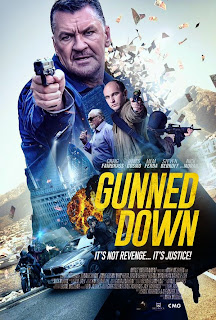 British action star Mem Ferda is set to captivate Cannes Film Festival goers as he squares up against fellow hard man Craig Fairbrass in ultra-violent silver screen production, Gunned Down. Directed by the legendary Mark McQueen, the highly anticipated film is slick, confronting and guaranteed to have viewers gripped from start to finish.

The high adrenalin action thriller is underpinned by themes of morality and honour, which put it on par with genre greats such as Heat, Point Blank and Sexy Beast. Its classic British crime meets hard hitting cinematic swagger in a film that’s sure to have Cannes critics on the edge of their seats.Ferda says, “I’m so excited for Gunned Down to be unveiled at the most prestigious film festival in the world. The silver screen is no stranger to action movies however a lot of the newer productions seem contrived and lacking depth. For me, Gunned Down is a gritty representation of the very real lives of violence that underworld figures lead. Craig has penned a powerful and provoking screenplay that grips audiences and relentlessly keeps interest in every second of screen time.”The film unfolds in two key locations – Southern Spain’s debauched and sun kissed city of Marbella, and the shadowy streets of London’s notoriously dark underworld.  When career criminal Jack Cregan (Fairbrass) embarks on a vendetta to solve the mystery of his father’s murder and reclaim a stash of stolen heist money, he quickly finds himself in collateral danger. Soon Cregan, his cousin Sammy and fellow gang members Eddie and Frank start to suspect that there is more to the mystery than originally thought. As Cregan starts to dig he must face the fact that his life is changed forever.  Brains, brawn and firearms collide as the men take on a gritty world of gangland criminals, corrupt police and vindictive cover ups.

Ferda fronts the ‘baddies’ pack as notorious East-end gangster and infamous London lap dancing club owner, Lenny Moore. Lawless, ruthless and willing to do whatever it takes to protect his underground empire, Moore is a serious hurdle for Cregan and his truth seeking crusade.    While Ferda’s performance is nothing short of brilliant, his aptitude for the role is to some degree attributed to his personal experiences. Like his character, Ferda also holds a dark past that undoubtedly enhances his portrayal of Lenny Moore. As a child he watched his father narrowly escape an assassination attempt, as a student he was detained by Serbian border police as a suspected drug smuggler and as an adult, he’s come face to face with armed gunmen in the alleys of Istanbul. While some may have let these experiences weaken their character, Ferda has used them to pull off utterly magnetic ‘hard man’ roles.

Ferda said, “As soon as I read the script the character of Lenny Moore cried out to me. His authenticity and complexity has me riveted, and I knew I had to bring him to life.”As well as starring alongside Fairbrass, Ferda is backed up by a talented cast of well-known names. Co-stars include James Cosmo (Game of Thrones), Steven Berkoff (Octopussy), Nick Moran (Lock, Stock and Two Smoking Barrels), and Nathalie Cox (Kingdom of Heaven).

AboutMem Ferda was born in South West London in 1963, and started acting from a young age. This led to graduating with a Postgraduate Diploma in Classical Acting from The London Academy of Music and Dramatic Art (LAMDA). He went on to carve himself a successful career, landing a myriad of TV roles, commercials and films. Over the years he has taken on a notable list of ‘baddies’ roles, including Dusan (The Crew), Hakeem (The Veteran), Vladimir (ill Manors), Kamel Hannah (The Devils Double) and Ilir Duka (Dirty Money). His most recent role is Lenny Moore in Gunned Down, debuting at Cannes 2015.ContactTel US: 917-720-3025Dakota Digital for Mem FerdaContact: Jade CaytonEmail: Jade@dakotadigital.co.ukTel UK: 01623 428996
No comments: