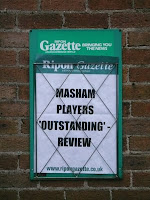 Look what I saw today when I went to Masham newsagents to collect my newspaper.

I just had to go home, grab my camera, and go back to get a shot.

Well done Masham Players for putting on a great performance, and good on the Ripon Gazette for telling the world via this billboard!

Note these dates in your diary. The Autumn Production will be performed in Masham Town Hall on 19th 20th and 21st November 2009.
No comments: Links to this post

The spring production of Masham Players Sleepers Awake by Alan Griffiths was billed as a lighthearted play.


I went along to the opening night, Thursday 19th March, and was entertained throughout.

The programme said:
A strange visit from the electricity board man followed soon afterwards by a visit from the gas board man, may cause a wedding to be postponed and the promise of a holiday in Scotland that no one wants. For Mr & Mrs Rainbow these strange events bring something almost surreal into their normal quiet lives. Will they be able to cope with what is asked of them? Or will the whole episode end in absolute chaos and danger?

The audience loved it!

The play was superbly directed by Marjorie Tate, and the two new members, Elizabeth Wilcox and Charlie Andrew, were exceptionally good.

The cast of six performed with gusto. Jonathan Trenholme and Susan Rouse, as Mr. and Mrs. Rainbow, played their parts extremely well, particularly the hilarious karate scene, and the reaction of their neighbour, Doreen, was played to perfection by Pam Grimsditch.

Add to this Ron Smith and Charlie Andrew playing Ivan Gromyenko and George Phipps Sanderson with enthusiastic exuberance. And Elizabeth Wilcox as Sharon, the daughter of Mr. and Mrs. Rainbow, whose wedding may have to be postponed, and what do you get? An absurd situation, but a situation that the audience loved.

At the end of the performance I heard comments like: perfect casting, brilliant acting, just the right length, and the best yet!

Congratulations to Masham Players for another outstanding production.

HOWEVER, I have one criticism.

There was no National Anthem played at the beginning of the performance, and I, among many others, would like to know why not?
No comments: Links to this post

Audrey Hepburn arrived at my home yesterday!
Okay, so she took the form of a print on a T-shirt - but I got your attention, didn't I? ;-)

I ordered a T-shirt from Iffyton www.iffyton.co.uk via their website, and the delivery was so fast it left me spinning.
Impressive!

I ordered a pale pink, medium size. The one that arrived was not pink, but more of a light red. Better colour, actually. When I unpacked it I thought it was going to be too big, but no it fits really well.
I took a pic to let you see Audrey and I spinning records together! 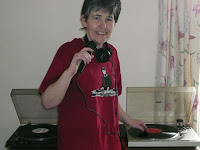 I love this T-shirt, it's 100% cotton, well made, and good quality. It feels nice, and is comfortable to wear. I am waiting to see how the 1% magic mentioned on the tag 'mixes' with my 100% magic personality ;-) Maybe it will turn me into a professional DJ!

The next 'spinning session' will take place in the washing machine. Watch this space for updates.

But, before I sign off, I want to mention how easy it was to navigate the Iffyton website. They have a great selection of fabulous T-shirts.
Check it out.

Last night Sat Nav and I went to Waterloo, ooops sorry, no, my mistake, it was Hambleton Forum, in Northallerton,www.hambleton.gov.uk to see our good friends Abba 2 Bjorn Belief www.hottownmusic.co.uk/Abba2 in concert.
As always, they were fabulous!

I, of course, Honey Honey, was the supreme Dancing Queen of the night ;-)
Sat Nav was a Super Trooper and Fernado didn't sit down all night.

When they started to sing Mamma Mia I thought Here I go again - my, my, how can I resist!

The audience loved them, roaring their approval throughout. A great thing about this band - apart from their fantastic musical talent - is that they encourage audience participation. The added humour is unique to their show, and this sets them apart from other Abba Tribute bands. They are the best, and give you a real fun night out.

So, Abba 2 Thank you for the music-- Nobody does it better!

See you in July guys.
No comments: Links to this post