It's that time of year again and Glastonbury Festival 2015 is already under way.

The line-up this year includes Florence + The Machine, The Who and Lionel Richie. And, for the first time actor and director Faye Morrison is managing the Banjo Stage right at the heart of the Green Futures Field. 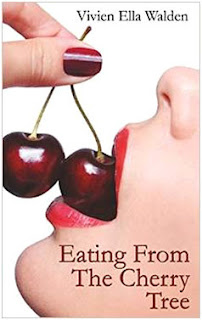 
EATING FROM THE CHERRY TREE is a dynamic, unique and totally revealing memoir of one of the most notorious and successful 'madams' the UK has seen in recent years. The book is inspired by Vivien Ella Walden's unique life experiences. Within a short time she becomes famous for her skills and able to afford whatever she desires within a world of scandal and naughtiness, corruption and suffering, sadness and exhilarating happiness. Images of a complex girl emerge from this incredibly frank account.

An account of a girl raised in a loving working class Jewish family who ran from her heritage, bared her perfectly formed derriere and partied with the elite and famous.  She takes on many guises and titles, while mixing with gangsters, politicians, film stars, musicians and artists. They all knew of her industry, it was not unlike theirs. Being a stripper, call girl, hooker, or madam, you have to know how to dance to the music, be a good actress, stand up to the toughest, deal with the law and paint your own picture for all to see.
The names of the rich and famous sprinkle this book, while telling a story of prostitution that has never been told in such explicit detail before. It will reach inside the heart of all those who admire absolute honesty on a subject many consider taboo.

'Eating From The Cherry Tree' is available from Amazon

About the Author:
Vivien Ella Walden’s main intention when writing her memoir was to help the cause towards legalising prostitution in the UK within the confines of established correctly run brothels.
Retiring from ‘show business’ in the sex industry to a quiet solitude. Vivien narrates her book in a dry-witted somewhat eloquent style. Observing the world that has been around her, mildly dismissive of her past, but not disdainful of it.  She recounts in colourful style the heady days of celebrity and the sordid behind the scenes cruelties, including bouts of unexpected violence as she muses on the nature of selling your body and the many pitfalls which entrap the worshipper as much as the worshipped.
Vivien will take the reader on a roller-coaster journey from her childhood as the only child of a mother whose burning ambition was for her to become a star to reflections at 65 on the choices made in an unconventional incredible life that she has literally laid bare in her compelling new memoir.

I have to admire Vivien Ella Walden for writing this amazingly honest book about her life as a 'Madam'. I very much enjoyed the read and would advise anyone who has any misconceptions about prostitution, being a working girl, call girl, whatever you would like to call it, to read this book. Of course there is sex between the pages, but there is also humour and sadness.  However, this is not just a story about sex, although there are many ups and downs, it is a memoir that delivers what it promises and is a unique and dynamic read.

Eating From The Cherry Tree

A short eBook I wrote to help others with a vestibular disorder.

In the past few months I have been diagnosed with Anxiety/panic disorder MdDS/Vestibular disorder and Visual Stress when I look at patterns or anything white. Now, where do I start?

Okay, here we go...when I was seven years old I fell off my bicycle and split my head open on a cement slab. I remember being rushed to the doctors and it was fixed. What wasn't known then is that the bump on my head had knocked out my centre of gravity, this was picked up April 2015 by an Ophthalmologist called Ruth Perrott BSc FBCO, of VisionCare Optometry, York. You could say that things became more clear (pardon the pun) to me after my tests and I received the diagnosis. Ruth also tested for Visual Stress/Scotopic Sensitivity Syndrome. And, yes, it was clear I had this too.

The weird thing is I went through school many years ago with these symptoms and it was never picked up. At the time Visual Stress hadn't been researched. Today, my GP, who is very good and knows all about Visual Stress - and MdDS - said I'd be surprised how many people in the military have it. Sometimes both conditions.

All of my life I've wondered why I had problems with reading a book, or writing in a book that had white pages. The white glares, the print distorts and it affects my eyes, causing eye strain and making my eyes sore and red. Same with a computer screen. It affects my concentration, and I become fatigued and anxious very easily. Although, I can read in bed using a lamp because it's a different light. I started studying with the Open University in January of this year and this was all picked up by their assessor who thought I might be Dyslexic. I was tested for Dyslexia and I'm not Dyslexic. However, sometimes the two are confused because the symptoms can be very similar. So, if you have children who have been diagnosed with Dyslexia maybe have them tested for Visual Stress. It seems that lots of people don't know they have this condition until they start higher education. I certainly didn't know. The reason being, I had studied before and passed many exams including qualifying to become a nurse.

If you follow the links above, and here, read the information it will explain all the symptoms of both Visual Stress and MdDS.

Having Visual Stress means you can't follow routes properly, and you get mixed up with appointments. My family laugh when I turn up to birthday parties a week early, or take the wrong turning when going to visit and end up miles away. I find it hard shopping in supermarkets because the lights affect my eyes. Dull weather makes my eyes blurry. Snow is an absolute pain, but for some reason I can wear shades when out in the snow, where when it's sunny shades don't help. I wear a hat to avoid the sun. When I look at some things i.e. gutters on houses, certain patterns, or a book shelf, they move and become distorted.

You become fidgety, and anxious, because your eyes aren't giving your brain the correct information to process. Having these symptoms along with MdDS symptoms means you are in double trouble. I always wondered why I felt as though I was off balance when I stepped of an escalator or stepped out of a lift. I was fine when I travelled on rough seas, or in an aeroplane, it was when I disembarked I felt as though I was still moving. I have the same symptoms when I get out of a car, or when I walk too quickly. I'm fine until the motion stops. The MdDS (Mal de Debarquement Syndrome) started when I went on a school cruise at the age of fourteen to Iceland and Noway. Most of the other children were seasick, not me. I was fine. Then the ship docked, we disembarked, and I felt nauseous. It didn't stop, and to this day the same thing happens.

It's been really awkward having to decline invitations due to having these symptoms and you begin to think you are going mad. You do get some respite, but then it comes back with a vengeance. In the past my GPs thought I was having panic attacks, and I was, because I didn't know what was happening to me. If you are in the middle of nowhere and you have the feeling you are walking on a trampoline, you start to panic. Now I know what the problem is, I try not to panic but it's not that easy. I learned from my GP that the condition causes anxiety and panic disorder. I knew I had a balance problem a few years ago and bought some Fit Flop (not to be confused with Flip Flops) boots and sandals because I thought they would help, and they did. But now, when I wear ordinary shoes, I'm off balance again.

I went on another cruise in the 1990s to the Mediterranean. We sailed across the bay of Biscay in a force seven gale. Yes, I was fine, but many of the passengers and crew had major problems and were so seasick they had to have injections. Our first port of call was Gibraltar; we had been at sea for three days. The moment I stepped ashore, I started to feel seasick. The captain told me it happens to sailers a lot when they have been at sea for a while. He said 'that's why they walk with their legs apart, to keep their balance.'

I thought writing this blog might make people aware of these debilitating conditions. I intend to write a book about both Visual Stress and MdDS in the hope it will help other people. If you, or anyone you know has these symptoms please get in touch with me via email because I'd love to hear your story, and perhaps add it to my book. If you would like to remain anonymous, that's fine.

Apparently all I need for the Visual Stress is tinted lenses, my colour is turquoise/green. The good thing out of all this is I finally know what is causing my symptoms after all these years. If I hadn't started with OU I might never have known.

Another thing...I wish they would bring back blackboards in colleges because the white board gives me hell. When I look at it I have to cover my eyes, a bit like a vampire lol!