On Wednesday 25th April 2012 Gloria (Sat Nav) and I were privileged to attend the Official Opening Ceremony of the UK's only Royal Tea Room which is in Stanhope, Weardale, County Durham, and aptly named RoyalTeas.

The Opening Ceremony was graciously performed by HRH The Princess Helen of Romania, accompanied by her husband H.E. Domnul Alexander.  Princess Helen gave a wonderful speech which was simultaneously heart-warming and poignant and she charmed everyone.

RoyalTeas is the brainchild of my longtime friend Anita Atkinson's daughters Ruth and Gemma.

Ruth had the idea to open a Royal Tea Room to celebrate our Queen's Diamond Jubilee and exhibit some of Anita's record breaking collection of Royal Memorabilia.

Gemma came up with the clever name.


Of course Anita couldn't have managed a tea room on her own....she is not a baker - sorry Anita, but you know it's true :-).... however, Christine Dodd is a first class baker and RoyalTeas is their terrific joint venture. It is open now and right through the summer to August of 2012.

Anita is a well know Royalist and holds the Guinness Book of World Records for having the largest collection of Royal Memorabilia in the world. And, what she doesn't know about the Royal Family History, past and present, isn't worth knowing. Over the last thirty years she has given numerous 'Royal Talks' always donating any money generated to charity.

As some of you know I have been a Royalist since the age of six when I managed to get my head stuck in the railings outside Buckingham Palace....moving swiftly on.......

RoyalTeas is a MUST VISIT.

Stanhope Silver Band played both the Romanian and our national anthems at the Opening Ceremony AND in RoyalTeas gave an impromptu performance of 'Raindrops Keep Falling On My Head' to celebrate the typically British weather! Oh yes, many raindrops were falling throughout the day....

The exhibition is incredible and so colourful it has to be seen to be fully appreciated. The food is fabulous - we recommend the plain scones with jam and cream, and the fruit cake.

RoyalTeas venue is courtesy of Stanhope Methodist Chapel who deserve a huge thank you for their support of Anita and Christine.

On Saturday 21st April 2012 Amy (my lovely niece) and I went along to my mountaineering nephew Joseph's Charity Event at Crook Town Cricket Club.

This was a very important event. Joseph intends to climb to the Mount Everest Base Camp. Not something for the faint-hearted I can tell you! Joe is studying maths (such a clever boy) at Sheffield University and this is a university led event but he has to raise £3000 before he can attempt the climb this August. He's climbing in support of Child Reach International.

We had a great night and terrific support. Joe's event raised £319.00.  Well done to my sister Judith who helped him to organize the event x


Two very talented singers lending their support for the charity. The magnificent Bryn Haswell from Newcastle and the fabulous Olly Hopper from Hunwick.


A huge thank you to Sharon Mclean a radio presenter with Venture Radio and to her family who travelled up from Burton-on-Trent.

We had the most amazing disco from Anita Atkinson with her Durham Dales Radio Roadshow. And the children had a lovely time dancing and playing pass the parcel. There was a quiz (my team didn't win) and a raffle.

At the moment the total amount raised by Joe for this fundraiser is £945.80. If you would like to support Joseph he has a My Donate site.

I'm going to be Usherette on Thursday 12th April
for 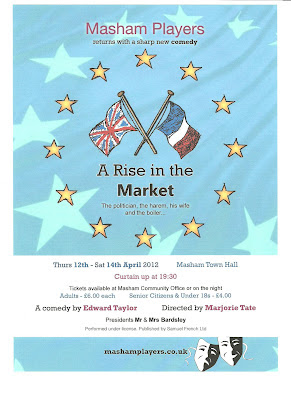