Recently I received two Deni Newton music tracks, Imagine and One Dream, to play on my Durham Dales Radio Show. I was knocked out! Her voice is absolutely stunning. So stunning I was hypnotized and almost missed my cue to play the next song. And, the words - written by Marilyn Berglas - really grab you.
Deni, now living in Omaha Ne., started her singing career early in Tulsa OK., where she had a recording contract with Shelter Records. Currently she is part of the multi platinum composer/lyricist Marilyn Berglas world team of music (cEmerald Lion Music) and working closely with Marilyn on all of her songs including several co-written with Harvey Mason of FourPlay. She is also recording for Marilyn’s Italian and Argentinian song writing partners.
Marilyn has been recorded by Johnny Mathis and Deneice Williams, Billy Preston and has well over a hundred songs recorded internationally. She stopped writing for twenty years to pursue a performer career. She played at the Polo Lounge at the Beverly Hills Hotel for six years (I actually visited the hotel while Marilyn played there, now that’s what I call a coincidence) and has played for almost everyone in entertainment, Christopher Plummer, Chevy Chase, Stevie Wonder, Rod Stewart, etc.
Marilyn began writing again about sixteen months ago . . . after googling herself she was amazed to see that her songs had survived the test of time . . . and from that moment it has been music 24/7
This extremely talented duo met on facebook and the very first time Marilyn heard Deni’s vocals, she just knew Deni was the one to sing Imagine, a song she had written some twenty one years ago for a movie project that didn’t go into actual production. Imagine had been sitting on a shelf, so to speak, waiting for the right person to come along and that person is Deni. Now the song has been reborn.
I asked Marilyn how they manage to work together living so far away from each other.
She said, ‘I record a track in my studio in LA . . . Deni gets it and we work on it via phone and chat on facebook. When it’s there she sends it back to the studio where I vocal edit and master it.’ Look out for a forthcoming album and I understand a Christmas one is in the making too.
I asked Marilyn if they would be open to perform at gay events and she said, ‘We have been working solely on the recording end so far but are open to performing at gay events in the future . . . that would be great.’
Deni is #1 OMAHA at reverbnation with over 10,600 plays and being played on many stations.
Marilyn said, ‘We are just thrilled with the love and support we are receiving.’
You can hear some of Deni’s music at Deni Newton 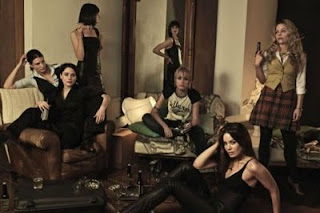 The girls are back in town.  Lip Service series two starts filming in Glasgow


The cast of BBC Three's provocative drama Lip Service, produced by Kudos Film and Television through BBC Scotland, return to the streets, bars and clubs of Glasgow’s Merchant City for a second series.
Ruta Gedmintas returns as edgy photographer Frankie, Laura Fraser as uptight architect Cat and Fiona Button as accident prone actress Tess.  A new face Anna Skellern plays the straight talking Australian doctor, Lexy, who’s turning heads and attracting attention.  As her professional life finally takes off Tess is trying to concentrate on her career but the distraction of romance may prove too much.  Cat remains torn between her love for Frankie and her commitment to charismatic cop Sam, Heather Peace.  However, with Lexy now entering the fray, it’s clear that life is going to get a lot more complicated for all of them.
Series Two will introduce exciting new characters into the tangled web of sex, lies and true love set in contemporary Scotland.  Neve McIntosh (Bodies),Sinead Keenan (Being Human) andAlana Hood (The Field of Blood) join the seductive and compelling tale of modern twenty-something lesbians finding their way in life.
The familiar lads from the first series James Anthony Pearson as loveable author Ed and Emun Elliott as bad boy Jay are joined by Adam Sinclair (Irvine Welsh’s Ecstasy) as irreverent, gay doctor, Declan Love.
Lip Service fans can look forward to developments in the girls’ love lives, careers and friendships which are as complex and challenging as ever.
Writer Harriet Braun says: “I’m delighted that this second series has given me a chance to develop more compelling stories for our characters as well as mixing things up with some new and intriguing faces.”
Derek Wax, executive producer, Kudos Film and Television says “The world and characters Harriet created captured people’s imaginations in a way we could never have anticipated.  It is so exciting to be back in Glasgow working with her, our tremendous cast and such an amazing Scottish team on the second series.”
Lip Service will be on our screens in 2012.  The series was written and created by Harriet Braun, the Executive Producers are Derek Wax from Kudos Film and Television, Matthew Read at the BBC and Harriet Braun.  Produced by Emma Kingsman-Lloyd, directed by Sallie Aprahamian (This Life, Teachers). 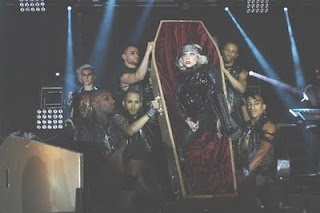 Talk about making an entrance! Lady Gaga was a tad late (at least half an hour) and when her dancers did appear they carried a coffin on stage with them. As you can imagine big hype and big drama . . . We thought is it Countess Dracula? When the lid eventually opened we had Lady Gaga standing in profile. Why? Because she was cleverly making full use of ‘stage props and costumes’ and purporting to be pregnant: to mega crowd reaction she began to sing her first fabulous number Born This Way. Hmm, a very interesting entrance. Rebirth!
She was ready to ‘deliver’ and ‘deliver’ she did. But you may be wondering who delivered the baby. Yes, it was (for those of you who have read Beautiful Strangers) Dr. Hyacinth Dickinson, obstetrician/gynaecologist, who just happened to be in the audience. Dr. D loves Lady Gaga, and (in the novel) she has a mother and baby home in Carlisle. So a match it was. 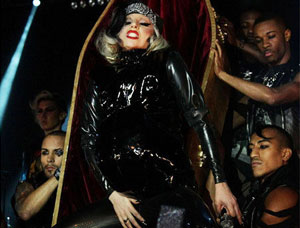 Poker Face and Bad Romance followed, along with Telephone and Alejandro, to name but a few. These are my faves. Don’t you think she has a look of Madonna and that her performance closely resembled Madonna’s when she was on stage? Not a bad thing. I love Madonna and think she will be well impressed that Lady Gaga is following in her footsteps.

I have a question for you, Lady Gaga: Was it you having a brew and chocolate muffin in the Moto services nearby . . ?
I’m sure it was :-)

Last Saturday (7th May) my friend Anita Atkinson and I set off for Leicester. We were to be filmed as part of the BBC’s Reel History of Britain series which is to be aired in September.
I had printed off directions from the AA Map but Anita said, “It’s ok, Ellen, I’ve borrowed a reliable sat nav.’ Wrong! Well, not totally wrong. We managed to get to Leicester all right, which was straight down the motorway and the hotel was in Blaby, only four miles from the motorway, so it should have been easy for sat nav . . .  Wrong again.
Anita’s ‘reliable’ sat nav took us into a supermarket car park first. The female voice told us to turn around. ‘Yes,’ we said, ‘we hear you, but where do we turn around?’ Sat nav couldn’t answer that one. ‘Aha! Got you,’ we said in unison. So, Anita used her own initiative. When sat nav finally said, ‘You have reached your destination,’ we looked along a street of terraced houses, and I thought, hmm, I don’t think so. I wound my window down and asked two pedestrians for directions; hence we found our hotel.
The hotel was very nice, and Anita decided to take a dip in the pool. I don’t interfere with water unless it’s in a controlled environment i.e. bath or shower.
I usually present my radio show on a Saturday night but, due to going to Leicester, I had to cancel my slot. However, thanks to the hotel’s free wifi and Anita’s Notebook, we were able to present a show. We sent out a facebook bulletin and within two minutes listeners were tuned in from around the world. Isn’t technology marvelous? 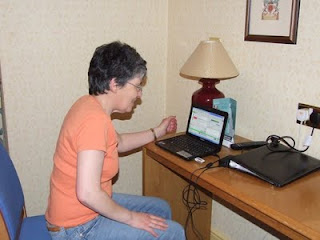 The next morning we had to be at the village hall in Countersthorpe for 9 am. I knew it was only ten minutes by car; I’d checked on google earth. Anita said, ‘I’ll set the sat nav just to see what happens.’ Actually, it did get us to the village hall, but not the car park that we wanted. It took us to a cul de sac behind the village hall. So instead of leaving the car and jumping over a fence, again we asked a passer-by. Sat nav, you’re sacked! 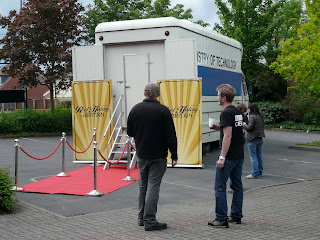 We got there, on time; the BBC crew were already setting up. We were given tea and biscuits then introduced to Dibnah the producer, along with Lorna assistant producer, and Nick and Chris (crew). They explained what was going to happen, then we were ready and waiting for the next move.
Anita and I were taken to the red carpet to be filmed first, and then we were asked to wait in the hallway, with a group of six other people, until they were ready for us. I said to Dibnah, ‘Are you sure we’re not filming Dr Who? Because the last time I was in this situation it was when I was abducted by aliens!’ She laughed, ‘I knew I was going to have trouble with you two.’ We had such a great time.
We watched two short films in the cinema and then Melvyn Bragg joined us on the red carpet to chat about the 1977 Royal Silver Jubilee. He is such a lovely man, and good fun too. When it was my turn to chat with him (I can’t tell you what we talked about because I’m not allowed to give too much away) we had four takes (out takes).
The crew, even though they were working very hard, had fun too. And, we met some loverly people from Countersthorpe while filming and look forward to seeing them again on the small screen.
All-in-all a great experience :-) 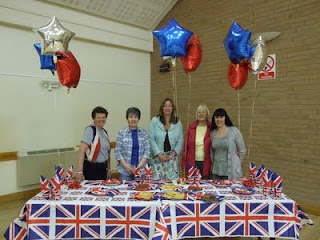 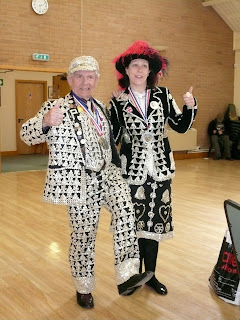