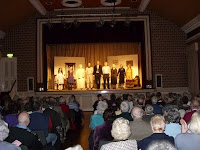 The cast line up for their third encore!

Masham Players Autumn Production of Happy Families by John Godber went down a storm last Thursday night. They played to a full house and had several well deserved curtain calls.

Happy Families follows the life of John, the son of Dot and Vic, from childhood to adulthood. John was brilliantly played by Richard Bailey, and the audience immediately warmed to him.

Congratulations to the director Julie Prescott who, in my opinion, cast this play perfectly. And to the cast for their hilarious, and poignant performance. I am a big fan of 'The Royle Family' and this play was definitely on a par with them.

I shall never drink Earl Grey again without laughing, and you might guess that in our house it has now become Early Grey!
And, I can remember drinking Rington's Tea during my childhood.

Another great production, however, I was disappointed again that our National Anthem wasn't played prior to the performance. It used to be - why the change?
No comments: 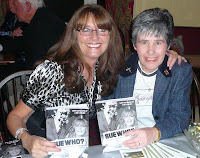 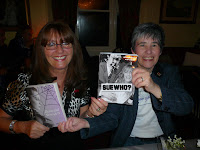 Sue and I swapping signed copies.

Last night Sat Nav, my niece Amy, and I were guests at the launch of Sue Bulmer's debut novel entitled Sue Who? at The Black Horse, Swainby, North Yorkshire

Sue Who? is based on Sue's own life experiences from her childhood in the East End of London, to becoming a fashion model and successful business woman. Sue describes her book as the 'Life and Loves of a 60's Model' 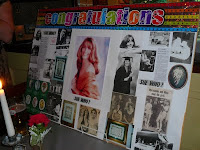 Back home after the launch I read the introduction; now I can't wait to read the rest.

But . . . I will have to make myself wait until I've finished reading Louise Bagshawe's novel Passion. www.louisebagshawebooks.com
Why?
Because I know that once I start to read Sue's book I won't be able to put it down. www.suebulmer.blogspot.com
No comments:

The video says it all! What a night to remember, the 5th November!
No comments: