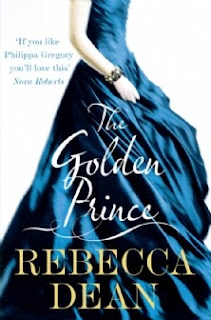 What an enjoyable easy read this book is. It captures you're attention from start to finish.

Although, I have to say, when you combine fact with fiction, which is what Rebecca Dean has done with this story, you have to make sure all the facts are true. Being a royalist nearly all of my life I have accumulated a lot of knowledge on royal facts, and some in this book aren't entirely true. If I wanted to be picky - like Jason Gardner  - I could say that the Union flag is only called the Union Jack when it is flown at sea, but that's not my way :-) And, this doesn't take away from the brilliant writing of this enthralling and captivating story. 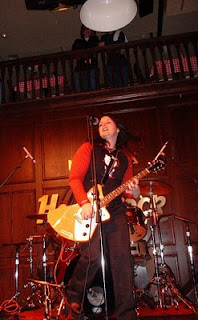 Jeryl Orsino on stage at the Hard Rock Cafe, New York
Jeryl is one of the many talented indie singer/songwriters whose music I play on my radio show at Durham Dales Radio
Jeryl has recently remixed one of her songs 'I Told You So' and this terrific remix was re-released shortly after Jeryl sent me the song to premiere on my radio show last Saturday 8th January 2011.
A few months ago I wrote an article about her for Shewired -  follow the link to read it.
You can check out her website Jeryl Orsino Music where you can watch her videos . . . and download her album 'Radio Friendly' or download individual songs.
Ellen Dean Recommends
No comments: 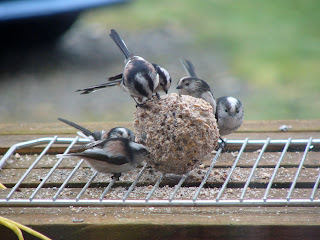 After much deliberation about my tits on facebook, it was decided that these birds are
Long-tailed Tits.
Apparently it has to be a severe winter for these tits to come to the table.
The UK has had it's coldest winter for a hundred years, and it isn't over yet! 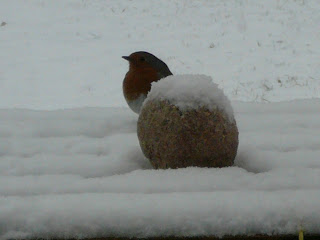 Our Robin - who stalks Sat Nav - has been with us for months now so thought
we'd give him a little bit of exposure. He's so pretty and friendly, and sings to her. 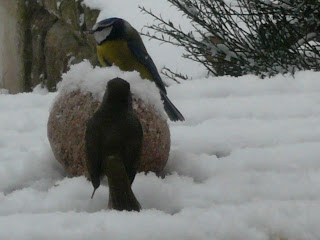 Our Robin sharing breakfast with a Blue Tit.
We often have Blue Tits (especially this cold weather) but the others were camera shy. 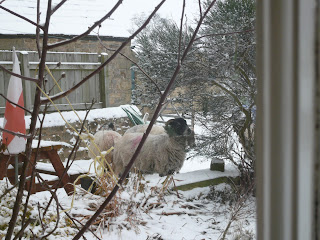 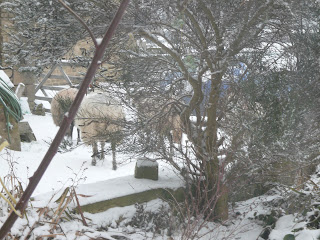 How did Batman get to be here?
Or, is it something else lurking in the bush?
This is not trick photography.
No comments:

At 9.03pm last night here in Masham, North Yorkshire, we felt the earth move. Was it an extremely heavy lorry going through our village? Was it a mega clap of thunder? Neither. It was an earthquake. And, not just one earthquake, but two.

My niece Amy and friend Brian were rehearsing (singing) in our living room preparing for their performance in Kirkby Malzeard on Thursday night, Sat Nav was counting them in and I was in the kitchen when we heard a huge rumble. Initially, I thought it was thunder. Brian thought it was a helicopter.

About five seconds later there was another rumble. Sat Nav checked the ponies, they were unsettled. I announced the event on facebook and twitter. Within seconds I had replies from all over North Yorkshire saying people had felt the same thing.
Then the news broke that it was in fact an earthquake measuring 3.6 on the Richter scale. The epicentre was Kirkby Malzeard, very close to where I live.

After about half an hour I felt cold so I went to turn the wall heating thermostat up. Now this is bizarre. It was turned off. Nobody had touched/altered it so how it came to be that way is a mystery. In fact we didn't know that it could be turned down so low - we are hot house plants!
No comments: