Siegfried and Roy Tribute at the London Palladium 28th September 2008 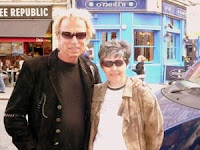 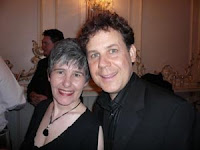 Thanks to my lovely and talented friend Diana S. Zimmerman, Gloria and I were invited to the Siegfried & Roy Tribute Night at the London Palladium to launch MagiCares The Magic Charity.
Diana, the first MagiCare Trustee, is the author of Kandide www.kandide.com and the Secret of the Mists, and a highly respected magician.
The atmosphere in The Palladium was electric. During the show the legends, Siegfried & Roy, were formally introduced by Lynette Chappell, the original 'Evil Queen' and naturally received a standing ovation. www.siegfriedandroy.com
Siegfried and Roy are Honorary Trustees of MagiCares. www.magicares.com

It is impossible to pay tribute to our entertainers who were, without exception, absolutely fabulous. Our host and MC for the evening was the incomparable Jeff Hobson. We - and by we I mean the entire audience which included Dame Shirley Bassey, the Arsenal Football team, and Ali Bongo - were spell-bound as world-class entertainers from around the world took to the stage.

Our sensational performers were:
Kalin & Jinger - stars of the Magic Underground in Reno,
The Great Tomsoni & Co from Poland,
Luis De Matos, Portugal's TV Magic Star,
Vik & Fabrini direct from the 'Crazy Horse' in Paris,
Wally Eastwood 'The man with the fastest hands on earth'
The unique artistry of Norm Nielsen,
Ben Stone who wrote and sang 'When Magic Cares, Miracles Happen'
The Post Modern Magic of Jason Byrne,
Raymond Crowe Star of the Royal Variety Show,
From Australia - The Sensational Soul Mystique.

AND the brilliant musicians of The MagiCares Big Band and their Musical Director Ian MacGregor.

Video extracts, and messages from Sir Anthony Hopkins, Cher and Steve Wynn were shown on a huge screen between performances.

Congratulations to Paul Stone, Executive Producer for bringing this fabulous event to the stage, and to Director, Anthony Van Laast MBE.
Free programmes were placed on every seat. Each contained an envelope for donations. We thought this was a brilliant idea.
The charity DebRA was the main beneficiary of the event, but supporters, carers and patients from several charities were there. www.debra.org.uk
DebRA supports children with EB (epidermolysis bullosa) a dreadful genetic condition that means skin isn't properly attached.

Siegfried & Roy have, for more than 20 years, been committed to the conservation and care of the Royal White Tigers and White Lions bringing them back from the edge of extinction, ultimately saving the species. They have generously given their time and resources to help animals and children.

During an interesting conversation with Siegfried he told me about the orphanage in Romania he and Roy had set up. And he was interested to hear about the fund raising events Gloria and I do for BOS (the Borneo Orangutan Survival Foundation). These guys certainly have big hearts, and a true love for animals.

The VIP party after the show was fabulous. You could say full of magic - it was certainly full of magicians. We had the pleasure of meeting the legendary Ali Bongo, who is the President of the Magic Circle.

Ruth, my friend's daughter (whose wedding I blogged about recently, and who lives in London) called in to the hotel to see us on Tuesday morning for a coffee and a catch-up. Before we returned home to a wet and windy Yorkshire we enjoyed spending time with Ingrid, a long-time friend of Siegfried & Roy.

We made some new friends.
Cynthia - it was a pleasure to meet and spend time with you. Hope we're all able to meet up again soon. Maybe in New York.
Ingrid - can't wait to see some of your photos.
And Arlene, may the 'vibrations' be with you.
Paul - thanks for the invite to Vegas!

My biggest 'thank you' goes to my good friend Diana for including us in this memorable occasion :-) 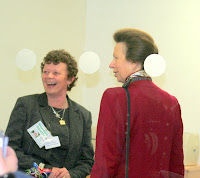 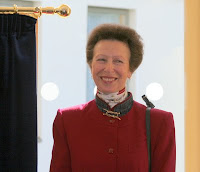 Today I was privileged to attend the opening of the new CSI Unit at Harperley Hall in County Durham by HRH The Princess Royal.

My best friend Anita Atkinson, editor of the Weardale Gazette was presented to Her Royal Highness. Anita told the Princess that she was the first Royal to visit Weardale for 700 years.

Anita has a huge collection of Royal memorabilia, and has been in the Guinness Book of Records with her collection.

Despite early morning fog delaying the The Princess Royals arrival, the sun broke through and we enjoyed a summer-like day. And what a super buffet was served.
No comments:

Sunday was Sat Nav's (Gloria's) birthday, and this year she'd decided on something completely different - a Murder Mystery night.
Parts were allocated well beforehand and there was no cheating by us reading the clues/script before the night. Honest!
All party guests really entered into the spirit of the game and thanks to Kathy's Catering (Kathy have you ever come across Davinia's Catering at all? Sat Nav thinks that you and your assistant Judy should set up in the catering business) we ate extremely well.
The scene was set for Casablanca 1942 and it was a hard murder to solve. Only one guest got it right, or was it 2 - can't remember exactly too much champagne!

On Monday we spent an interesting afternoon in a magical garden where we had to solve clues, and riddles and try to avoid the water hazards lol!!! There was a labyrinth of tunnels, chambers, follies and surprises. The temple of the underworld, the eye of the needle, a huge pyramid made of translucent glass, paths and passages that lead nowhere, and extraordinary statues.
I opened a door and a skeleton nearly jumped out ...and I thought there is obviously a staff shortage here if they have to rely on the skeleton staff!
Talking trees, a little boy statue that peed on you, dragons and dungeons. Harry Potter and his friends would love this place.
We were in Forbidden Corner www.theforbiddencorner.co.uk with some of our friends - a great place to go. But we needed a place to meet up beforehand, and what better place than the Brymor Ice Cream Parlour www.brymordairy.co.uk. Ice cream par excellence!
We had to be agile on our feet here, not because the ice cream was cold, but because the wasps wanted some as well.

Last night (Tuesday) we headed up to Darlington Civic Theatre www.darlingtonarts.co.uk to the opening night of Dancing Queen billed as All Singing, All dancing, Biggest 70s Party Ever!
We met up with my sister, my niece and my sister's friend. The show started with Abba hits, and then moved on to The Bee Gees, Village People and more. It had an exciting cast of twenty singers and dancers. It was a full scale dance party, with dazzling costumes, outrageous choreography (how on earth the dancers managed to do some of those leg positions I'll never know) and amazing musical arrangements. We were all encouraged to sing along and dance in the aisles, and yes...I did sing - very loudly lol !!!
2 comments: