I’d had this event for Thursday 14th July pencilled in my diary for a while and was looking forward to going to Hebden Bridge in West Yorkshire to attend a very special film premiere . . . Jan's Coming Out
Sat Nav (Gloria) and I set off at 4pm and should have arrived in HB an hour and a half later. I say should have. We hit the M62 at 5pm - a busy time anyway - and all hell had broken loose. Back-to-back traffic to say the least and, when things started to move, it was at snails pace. One reason was due to an accident, a load spillage, and the other just the sheer unbelievable volume of traffic.  How do people get around in the south I wonder? I did say to Sat Nav at 3pm that we should perhaps get moving or we might hit heavy traffic, plus, it was a hot afternoon. Ho hum - hindsight is a wonderful thing!
Three long hours later we finally arrived at Bar Place - owned by Lesley Wood who we’d like to thank for making sure we had a refreshing cup of tea :-) Carolyn Reid, the film director, was waiting to meet us. She introduced us to her partner, Alison Thompson, the film producer, and to bubbly Jan Walker, the star of the show. It was good to sit, relax with a cup of tea and meet some of the other women who had taken part in or had a connection with the filming of Jan’s Coming Out.
Being a northern lass I was thrilled to discover that partners Carolyn and Alison of Village Films Productions hail from Newcastle-upon-Tyne.
So what’s this film/documentary about?
The film/documentary is about the spirited and vibrant Manchurian Jan Walker, a woman who came ‘out’ at 50 years of age. I asked Jan why she decided to come out aged 50. Jan told me that her husband’s infidelity, and their subsequent divorce, changed her life. She set out to discover her true self. ‘I watched all of the episodes of the L-Word in one week and that was it - I had my answer. And even though I’d worked as a physiotherapist at a hospital and met many lesbians, I’d never given lesbian life a second thought. I told my three children. They are very supportive. Then I started to go everywhere lesbian. To groups, clubs, Pride events and on Olivia cruises.‘
How did the film/documentary come about?
Jan, Carolyn and Alison met by accident on a Olivia Cruise. A lucky coincidence since Carolyn and Alison had been wanting to produce a film about real lesbian lives for several years. And not fictional characters or something full of angst, but a story that reflected a little of themselves; two happy and in love lesbians. But the right ‘lead’ woman had never come along to be their conduit so the idea had been put on the back burner for some time . . .  until they heard Jan’s voice on board the Olivia cruise ship! They chatted with Jan for over an hour, and both thought ‘she’s the one’. It all started in Bar Place in Hebden Bridge on a cold December day in 2009. From then on the film developed a life of its own and Jan talked with many ‘out’ women celebrities including Val McDermid, Zoe Lyons, Jen Brister, Julie Storey, Meredith Baxter, Jill Bennett, Cathy DeBuono, Jennifer Corday, Andrea Meyerson, Dana Goldberg (to name a few) both in the UK and the USA. She asked them about chat up lines, flirting, and their own stories about coming out.
The result?
A fabulous, fun, uplifting documentary - with great music courtesy of Jennifer Corday - that carried the audience along at a lovely, happy pace from Hebden Bridge to Manchester and West Hollywood to Provincetown with several stops and detours along the way. We laughed, clapped, and we cheered. After the film it was back to Bar Place for the after show party :-)
Congratulations Jan, Carolyn and Alison on a truly brilliant and inspiring film. More please . . . how about a fly on the wall documentary where we can follow Jan on her quest to find love?
Ellen Dean Recommends
2 comments:

I am proud and honoured to be the first Patron of Outpost Housing Project based in Jesmond, Newcastle-upon-Tyne in the northeast of England, UK.
The following pictures speak for themselves.
Please support this project. 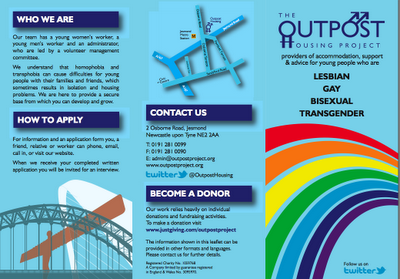 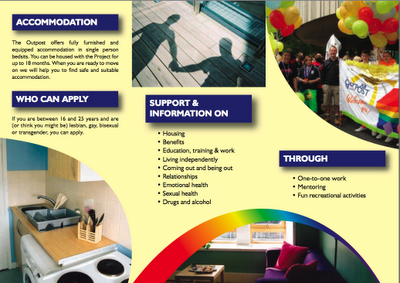