One Day, One Night: Portraits of the South Pole by Dr. John Bird and Jennifer McCallum - Book Review

Experience Life At The Coldest And Most Isolated Place On Earth
New York, NY, November 11, 2017 ― Imagine, for a moment, spending one year at the bottom of the world, in 100-below-zero temperatures. One couple chose to not only imagine it, but to also live it, and they've written a riveting account of their unforgettable experiences.
In One Day, One Night: Portraits of the South Pole, scientist John Bird along with writer and composer Jennifer McCallum take readers along on a journey like no other, as they fly to the middle of Antarctica and live under the dome for a year with 50 other researchers at the Amundsen-Scott South Pole Station.The book's title is a nod to the six-month-long "day” of 24-hour sunlight and the six-month-long "night” of perpetual darkness. The nonfiction narrative provides a candid, first-hand account of the challenges the couple faced as they tried to adapt — both physically and emotionally — to a year of isolation in the unforgiving environment.

I have written a couple of blogs regarding Vestibular Disorders 2016 and MdDS (Mal de Debarquement Syndrome) 2015 because I suffer from these debilitating disorders.

Yesterday, 17 February 2018, there was an earthquake 4.2 magnitude in Swansea, Wales, UK. Then there were aftershocks.

I have to say last week, prior to the earthquake, my symptoms hiked terribly and I could hardly put one foot in front of the other. Last night they seemed to settle down.

Now, I have to ask the question...do imminent earthquake vibrations cause balance/vestibular disorders symptoms to worsen?

Vibration is a cause of symptoms worsening whether it be traffic passing you while standing on the pavement or while holding a hairdryer. Surely there must be some vibration when an earthquake is imminent? After all, when a Volcano is about to erupt we get a warning.

I researched and found an article (my friend Polly Moyer and I had discussed previously) written by John M. Flionna, in the Los Angles Times  about an Ear Nose and Throat specialist at Tokyo Medical Centre who suffered MdDS symptoms following the 2011 earthquake in Japan. This specialist says he is now sensitive to even small vibrations and is now both physician and patient.

And then we have Solar Flares added to the mix. There was a Solar Flare (small one) which can affect radio signals, giving us weaker power grid fluctuations, on the 16th February 2018. Apparently a Solar Flare can also cause worsening symptoms for people with vestibular disorders, and Mental Health disorders, according to scientists.

Another interesting article I found was about Lizzy Arnold (Olympic Gold Medal Winner Skeleton 2014 and 2018) who has suffered from a vestibular disorder for several years and was only diagnosed in 2017. I feel her pain. I too suffered for years before being diagnosed. Wish I could see the same experts who helped her. She is a credit to all people who suffer from this condition. Huge congratulations to her.
I might take up Skeleton 🛷 racing to see if it helps my disorder.

My ebook:
About How Vestibular Disorders
Can Cause Anxiety/Panic Attacks
And How To Survive Them


DISCLAIMER: This blog contains affiliate links, which means that if you click on one of the product links, I’ll receive a small commission. You don't have to buy the items shown in the advert. You can buy anything. The link is a doorway. This helps support the blog and allows me to continue to allow you to read for free. Thank you for the support!

For a while I'd been looking for a first class home valeting service for a long time without success. Google came up trumps and I found the amazing Pete McBretney's Home Car Valeting Service and thought I'd spread the word so you all could receive the benefit.

It was hard going for me to try to wash and vacuum my car (it didn't get done very often only when the garage did it) due to my having a debilitating vestibular disorder.

I thanked my lucky stars when I found Pete McBretney. Pete lives not too far from me, but he covers a thirty-five mile radius from his base at Leeming Bar, North Yorkshire, and he is an absolute pleasure to do business with. When he's finished valeting my car it looks like it's just come out of a showroom, and I feel like I have a new car. Pete doesn't rush, he does a thorough job, and doesn't charge the earth for it. 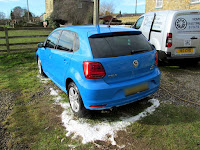 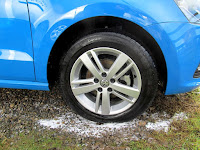 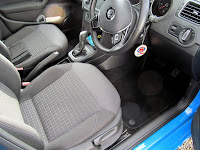 DISCLAIMER: This blog contains affiliate links, which means that if you click on one of the product links, I’ll receive a small commission. You don't have to buy the items shown in the advert. You can buy anything. The link is a doorway. This helps support the blog and allows me to continue to allow you to read for free. Thank you for the support!
2 comments:

I bought a Green Screen and used it for the first time. This is the result. Ok, so it isn't perfect, nowhere near, but I had so much fun trying it out. I'm also getting to grips with Final Cut Pro X. It's all about practicing. Actually, I look like I'm being attacked by a gang of Midges buzzing around my head. I'm not calling this video a failure, I'm looking at it as a huge learning curve and correcting what I've done wrong.

This is what happened when I tried to correct my mistake. I turned myself into an apparition. I used the Sample Colour, Final Cut Pro X, it didn't work as well as I thought it would. Back to the drawing board.

Links below to the equipment I used.


DISCLAIMER: This blog contains affiliate links, which means that if you click on one of the product links, I’ll receive a small commission. You don't have to buy the items shown in the advert. You can buy anything. The link is a doorway. This helps support the blog and allows me to continue to allow you to read for free. Thank you for the support!
No comments: