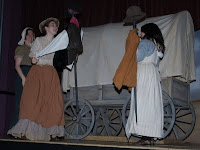 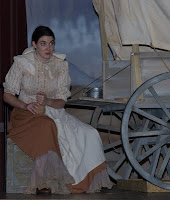 The play, written and directed by Nobby Dimon, tells the tale of three strong women:
Annis Hawker played by Fiona Paul,
her sister May Buxton played by Vivienne Garnett,
and Annis's daughter Hope played by Amelia Newbould.
The likeness between the girls was uncanny.
This family have their roots here in North Yorkshire, England. They originated from Wensleydale, but emigrated to America because Annis's husband Sam saw a better life for them there.

Although they settled Sam uprooted them again to hit the Oregon Trail. Sadly Sam drowned shortly after they began their arduous journey and the women were left to struggle.
The audience were swept along with the women's emotions and we were all rooting for their success and happiness.
A truly brilliant performance.

The stage and props were incredibly creative; another huge success for North Country Theatre. Congratulations.