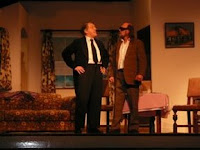 I really enjoyed this play - it made me laugh. I think it was great choice.