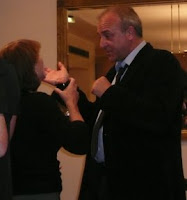 Went to see the matinée performance of 'Terms of Endearment' today at Darlington Civic Theatre. We had what we would consider to be the best seats - front row dress circle. I was surprised that it wasn't a full house, although I think the stalls were pretty full - I don't like to look over the edge due to my dislike of heights - but there were empty seats behind us. I asked one lady if she had any idea why it was so quite when there was such a brilliant star cast about to perform. She answered me in all seriousness saying, 'Why pet . . . they'll all be at the bingo . . . it's the Snowball (big money!) this afternoon.' There was no answer to that.

Then the announcement came just before curtain up requesting all members of the audience to switch off their mobile phones. We almost burst out laughing as nearly every elderly female reached into her hand bag, got out her mobile phone and switched it off ;-)
(We switched ours off before we went in, aren't we the little goody two shoes lol)

It was an amazing play with superb performances by Linda Gray as Aurora Greenway, Suranne Jones as her daughter Emma and John Bowe as Garret the astronaut and cad of a neighbour. They portrayed a perfect blend of humour that had us laughing out loud, and heartbreaking tragedy. Suranne's final scene had us weeping into our hankies en masse.

I have to mention how convincingly well John Bowe burst onto the stage portraying a drunk - he was hilarious and his infectious laugh instantly had the audience giggling along with him.

What can I say about Linda Gray? She's a very beautiful woman, and a fine actress. Understatement . . . It was a pleasure and a privilege to watch her performance today and I am so pleased that she has come to the UK. I know I speak for all of her fans here. And I am lucky to have had the opportunity to meet Linda again today.