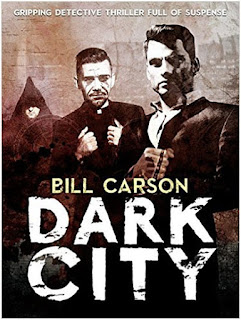 Dark City: 4th Instalment of Nick Harland Detective Series Hailed “Unputdownable”. Like Raw Suspense? Read On!
Bill Carson’s ‘Dark City’ throws readers into a dark and distributing new murder case that has landed on the desk of private investigator, Nick Harland. A young girl is dead, an elderly double-murderer has just been released from prison and the potential links between the two appear too close to be mere coincidences. But are they? That would be telling...!
Synopsis:
A must read for all those who like to sit uncomfortably on the edge of their seats.Dark City is the fourth book in the Nick Harland detective series. In this one we follow him on his most perplexing and disturbing case to date, as he tracks down a serial killer from the past.The book begins with an elderly man being released from prison, after serving seventeen years for a double murder. A few days after his release a young woman is snatched from outside a London pub.The police seem to be dragging their heels, so the family of the missing girl call on the services of the tough, uncompromising ex murder squad detective, turned Private Investigator, Nick Harland. During his initial investigation another girl suddenly goes missing, he then gets a tip off that Charles Thorpe had just been released from prison. Nick knows the killer, as he was the detective who put him behind bars when he was a detective in the murder squad. And so the hunt is now on for Thorpe, and Nick will not rest until Thorpe is found, and he promises that Thorpe will pay the ultimate price for his crimes this time around.Much more can’t be revealed, as it would give too much of the exciting plot away.This is a fast paced dark and gritty story, packed with hard hitting action, highs and lows, intrigue and tension. This story has characters that are good, and sometimes very, very bad. Dark City is crime noir in the truest sense.
“Nobody will deny that serial killer thrillers have captivated the market for generations,” explains Carson. “My goal has always been to give readers all of the disturbing hallmarks they crave, while also pummelling them with highly-original characters and plot twists they have never come across before. I almost throw them into a movie and force them to be a character.”
Continuing, “There’s layer upon layer of twists in this new volume so, while you’re paying for the whole book, be prepared to only be needing the edge of your seat!”

About the Author:
Author Bill Carson gained not only his experience in observing crime and sociopathic behaviour as a nightclub bouncer, fascinated with the events he saw he began making a record of the more unusual and violent incidents that occurred. He compiled this in his first book SHOW NO FEAR and enjoying that outlet he enrolled in an Open University fiction writing course which after a year of hard study he passed.
He continues to pen crime novels now and has an entertaining series he terms the Nick Harland British Detective Series, of which NECESSARY EVILS was Book 1, NEMESIS was Book 2, NEVER SAY DIE was Book 3 and DARK CITY is Book 4.
Since releasing the first volume of his Nick Harland detective series, British author Bill Carson has built a rapid and fierce reputation for crafting fiction that not only mimics some of the best gritty, raw suspense stories of yesteryear, but mixes them into a cocktail with wholly-unique new twists.
Volume four, ‘Dark City’, is no different. There’s another cold case on the table – and things are about to get weird.
My Review:
Loved the story. Loved Nick Harland and his ways of getting the job done. At one point I was going to read the end of the story because I couldn't wait to find out who the killer was, but I resisted temptation. For anyone who loves psychological thrillers, this is the book for you. The only gripe I have is I would have liked to have names of the group of thirteen. Could be there's a another book coming? I hadn't read the previous three in the series, but it didn't matter Dark City is a stand alone.