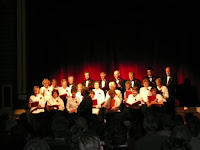 On Saturday night I had the pleasure of attending Masham Musical Society's Annual Concert. The concert was billed as Now and Then.


This year they had a new conductor Mr. Jonathon Heitler and a new accompanist Mr. Anthony Rudd. Not only that, but they also had four new members. One was Sat Nav (Gloria) who had been practicing not only at rehearsals, but also at home for weeks. Of course she had me singing along too. We Gathered Lilacs in the kitchen, Ruled Britannia regularly. Razzle Dazzled Katie (our horse) in the stable, and were sure our neighbours were wondering Why Must The Show Go On? But they must have been relieved to hear that Christmas is Coming.


But seriously . . . that should give you some idea of the content of the night.

I wish I had taken my Union flag to wave when they sang Rule Britannia, but never daunted Brian and I waved our programmes ;-)

Their performance was absolutely fabulous! If you were in the audience you should Consider Yourself very lucky indeed.
And I'm not just saying that because Sat Nav made her debut with the society - it's true!

Congratulations and well done to everyone.