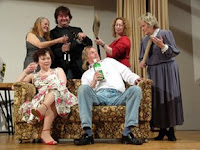 It's been a week of drama for Sat Nav and I. First the Magic of the Musicals, and then Masham Players (our local amateur dramatic society) were performing their autumn production of 'The Cat's Away' on Thursday, Friday and Saturday. This was directed by our good friend and fellow myspacer Brian, who described the play as 'a comedy of a misconstrued situation, misplaced intentions, an over-bearing mother-in-law, and broken garden ornaments!'

The first few rehearsals didn't go well at all, and we thought the play was jinxed. It certainly was a case of the cast pulling everything together at the eleventh hour. In amateur dramatics time is a huge commitment with everybody giving up their valuable time. One of the cast ended up on antibiotics two days before the opening night, another had a sore throat, but carried on valiantly. And the lines . . . well they just refused to be learnt :-) So much so that we thought we were going to have to send Brian for therapy lol!

Ticket sales for Friday and Saturday were very poor because Friday clashed with children in need and Saturday clashed with a musical event happening in the church, so in line with that Sat Nav (business manager) didn't bother to order any extra ice creams for Saturday night . . . big mistake as it turned out. But she is blaming Fiona for that because she talked it over with her and their decision was unanimous lol!

Thursday night we had almost a full house. I was usherette and sold ice cream with Sat Nav and Fiona. My, don't I live the high life. On Thursday nights the cast and crew prepare and serve the audience with an after show supper. You have to be quick on your feet and get out of the way of the stampede down to the supper room at the end of the show.

Friday night I am happy to report we had almost a full house too, I am happy to say that word had got around just what a great production it was. The cast and crew all signed a programme, and so did the writer Ian Hornby who had traveled quite a way to attend. Brian auctioned the programme for children in need and raised £30 which Sat Nav will be banking for them tomorrow. Ice cream sales went well, but going on past performances Sat Nav and Fiona still decided there should be enough. Wrong!

Saturday night sales started very slowly and then whoosh . . . almost a full house again and guess what? They ran out of ice creams. Sat Nav was mortified.

So congratulations to the director Brian who pulled it off in the end and to the cast and crew.

It makes me realize how much I miss treading the boards. Maybe next time. Whoops! I can feel a song coming on.