The Curse of Mary Ann Cotton

Synopsis from back of the book:

In October 1872, Mary Ann Cotton was arrested for poisoning her Stepson, Charles Edward Cotton, at their home in West Auckland County Durham England. The truth only came to light once Mrs Cotton tried to put her stepson into the local workhouse and was told that she would need to go in too. She told the villagers “of course, he will never be able to get up; he will go like the rest of the Cotton family”. A few days later the child was dead. This raised concern with the locals and the local doctor and the bodies of some of the victims were exhumed. Once tests were carried out on the organs, traces of arsenic were found and Mary Ann was arrested on suspicion of murder. Once the police started to look into Mary Ann’s past, it is believed that she murdered 3 of her 4 husbands, 11 of her children, and a lodger. All of this was by arsenic poisoning and to collect insurance money from each victim. Mary Ann Cotton was hung at Durham Prison in March 1873.In Mary Ann’s last residence, on front street in West Auckland, strange things were happening to the tenants that lived there. An angry spirit seemed to reside on the top floor, a boy was seen on many occasions and people were being scratched.A team of local paranormal investigators were invited along to see if they could discover what was happening within the home. It was a night that they will never forget, but that was only the beginning of a roller coaster journey that has lasted for 4 years.This is the story of what happened on that ghostly night and what has happened since.

E. P. Kelly (Elaine) has, with her group Spectre Detectors, been investigating the paranormal for over nine years in the north east of England, and London. They have videos I recommend you watch on YouTube

I have had an interest in Mary Ann Cotton's case for some years now. As children we had all heard the story along with a song made up about what happened. This book isn't about the story as such, it's about a paranormal investigation by a group of spiritual detectives who talk to the spirits of people Mary Ann was alleged to have murdered. I have researched evidence of the alleged murders by Mary Ann Cotton and, if it was presented to court today, it would be thrown out. The book is advertised as For Entertainment Purposes.

I enjoyed reading the book but had to keep going back and forth to ascertain who was doing the talking i.e. spirits or the spectre detectors as there were so many names to contend with. I believe there is another world where spirits reside and I believe we get messages from the spirit world. I also have to wonder if the spirits, over the years, heard residents in the said house talking about Mary Ann (what she allegedly did) and thought the stories were true so passed this information on to the spectre detectors. Who knows?

Shown below is a copy of the actual death certificate of Charles Edward Cotton one of her children she was supposed to have murdered with arsenic poisoning. But, the whole house, utensils and contents, were forensically analysed and no traces of arsenic were found. The teapot, possibly belonging to Mary Ann, which is in Beamish Museum will not be analysed for arsenic (according to the museum) because they are not sure if it is Marry Ann's teapot. 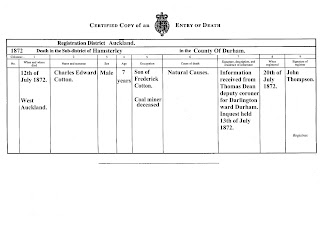 We also have to remember Mary Ann has living descendants who are constantly bombarded with theories about her. Because of this I think it would be an idea to open a cold case investigation and then we will really know what happened. It can be done.
Ellen Dean Recommends

DISCLAIMER: This blog contains affiliate links, which means that if you click on one of the product links, I’ll receive a small commission. There will be no cost to you. You don't have to buy the exact items shown in the advert. You can buy anything, the link is a doorway. This helps support the blog and allows me to continue to allow you to read for free. Thank you for the support J