Geo Says No - Not a Dream by I. Rosenfeld - Review 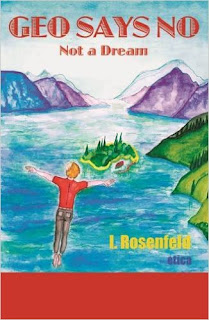 Who are you, really? On the night of the earthquake, George was dreaming of a red guitar when the noise of someone creeping around in his bedroom woke him up. Following a natural disaster, sixteen-year-old Geo is left with nothing except a dream catcher which opens his parents strange world of dreamboarders. To clear his father's name from the blame of treason, he cheats the Marshals of Tide and Time and fights the deadliest of enemies. But will he and his friends survive without the training he needs to become worthy of his gifts? A modern fantasy thriller, Geo Says No: Not a Dream is both part of the forthcoming Geo Says No series and a standalone novel in its own right. Dealing with more series issues such as responsibility and power in a deteriorating world, as well as a quest for a missing father, it provides powerful food for thought alongside an exciting adventure story.

Described as a page-turner by a panel of child and teenage reviewers, Geo says No: Not a Dream will appeal to 10-15-year-olds with an interest in magical worlds, special powers and unexplored lands.

I. Rosenfeld has lived in Corfu, Cambridge, Brighton and London. She studied English at the University of Sussex, then Teaching at The University of London. She also blogs at Creativity and Us She lives in Lambeth, South London, with her partner and occasionally two visiting children who fill the washing machine and empty the snacks cupboard.

Let me start by saying I don't read fantasy books: I haven't even read any of the Harry Potter books! But, hey ho, a change is as good as a rest :-) and I have to admit I did enjoy it. The fact that it was written for 10-15-year-olds didn't matter, anyone over 15 can read it and enjoy it. I loved how the story unfolded the relationship between Geo and his parents, and the ends Geo would go to to save his father's reputation. This book is very well written, the creative ideas are original and the story flowed like magic.