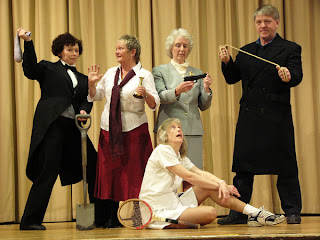 If you missed the Masham Players Spring Production of The Farndale Avenue Hosuing Estate Townswomen's Guild Dramatic Society Murder Mystery, a comedy by David McGillivray and Walter Zerlin Jnr. then you missed a treat. This brilliant production had the audience intrigued and enthralled from start to finish, with full audience participation included!! I understand that Susan Rouse returned to the Masham stage to act alonside her mother, Marjorie Tate, and what a treat it was.
The action of the play took place in the drawing-room of Checkmate Manor, Lady Doreen Bishop's ancestral home, an isolated house near the sea. The entire cast had terrific stage presence and each gave outstanding performances. Thunderous applause nearly brought the house down when Jonathan Tremnholme took centre stage as a 'Townswoman of the future' in a short pink sparkly frock. The play was expertly directed and cast by Julie Prescott and the incredible lighting and sound effects were superbly managed by Fiona Lofthouse.
The action was fast and pacy with never a dull moment and Julie's debut as a director was an outstanding success. They should all be proud; this play deserves to be seen by bigger audiences.

Signing off for now but make a note in your diaries that The Players autumn production dates are 15th, 16th & 17th November 2007. See you there.